<h1> This is the main section heading.

On this site, it's used as the title of the page.

<h2> This is the second level page heading

Used as a section heading beneath the main heading.

<h3> This is the third level page heading

Used as a heading beneath the second level heading.

<h4> This is the fourth level page heading

Used as a heading beneath the fourth level heading.

<h5> This is the fifth level page heading

Not typically used on this site.

<h6> This is the sixth level page heading

Not typically used on this site.

This is a paragraph. Paragraphs are wrapped in <p> tags.

And then I'm gonna totally fake die, of a fake heart attack!

<strong> tags are wrapped round text that is important.

Do you think I have the goods, Bubblegum? Because I am into this stuff!

For emphasis, the <em> tag is used.
Imagination is for Turbonerds who can't handle how kickbutt reality is!

Being a magical dog, Jake, perhaps unsurprisingly, also has an acute sense of smell, as he can apparently smell the precise location of an object miles away.

Asides are marked up using the <aside> tag. They can be used for content considered separate from the page content.

Abbreviations are marked up using the <abbr> tag. To mark up an abbreviation like LSP, this code is used: <abbr title="Lumpy Space Princess">LSP</abbr>

A <blockquote> tag can be wrapped round a paragraph that is a quote. A <cite> can be added after the quote. This isn't strictly the correct use of the tag because it doesn't allow for someone's name, but there isn't a suitable alternative for encapsulating a reference to a work and a person's name.

Slaps, that cat was kicking my buns. And it might of finished my buns it if wasn't for Jake's stank

An important image should be wrapped in a <figure> tag. For this tag to be used, it must still make sense if the figure were separated from the document. 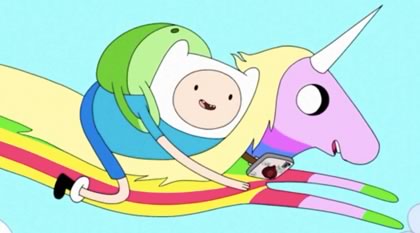 To pull an image to the left, give it a class of pull.

To push it to the right, give it a class of push.

These classes can also be applied to other elements, such as <figure> and <div>.

The alt text needs to describe the image in a way that would be useful to someone if the image failed to load.

Interviews have a small avatar of the people speaking next to what they're saying. This is just an image tag. The alt="" is left empty because the image isn't essential to the understanding of the text, and the name would be repeated.

I chose to use a <b> tag for the name because it seemed appropriate based on the new interpretation of the tag.

The b element represents a span of text to which attention is being drawn for utilitarian purposes without conveying any extra importance and with no implication of an alternate voice or mood, such as key words in a document abstract, product names in a review, actionable words in interactive text-driven software, or an article lede.

HTML, the living standard by WHATWG

The image only needs to be added to the first paragraph of many spoken by the same person, until the person speaking changes.

Marcus: Hello Paul, how are you? I’ll be very amazed if this is a very small mini-micro boagworld because they never are!

A ver small snippet of code can be marked up using just the <code> tags. If it's a longer snippet, use the following:

Code will need to be written using less than & lt; and greater than & gt; encoding (without the space after the ampersand).

Interview articles have audio. This can be embedded using the <audio> tag. This displays a media player in modern browsers. In older browsers, we need a fallback, which will just be a link to the file.

All large media files like audio and video are hosted on Amazon S3.